Dedication, teamwork and our company value ‘We Care’ were proudly on display during and in the aftermath of a ‘supercell storm’ that wreaked havoc on the north coast of New South Wales.

Areas of Sawtell, Coffs Harbour and Toormina were pounded by large hailstones, strong winds and a 50mm deluge of rain in under an hour on October 20. The storm forced the closure of a high school and caused the roof of a shopping centre to cave in, as well as causing significant damage to several properties and vehicles.

The storm also affected the working days and personal lives of our employees and customers across the community, in addition to closing several arterial roads and damaging CDC vehicles and depot infrastructure.

Regional Manager North, Tony Mills, said that despite the conditions, all drivers showed their care for customers and the community throughout the ordeal.

“While the storm created dangerous conditions, our drivers continued on to their depots to commence their shifts, to ensure that customers were looked after,” Mr Mills said.

“Phones and the internet were out for several hours, but we were able to rely on our in-house two-way radio system to communicate.

“Despite all the chaos, our team ran like a well-oiled machine, working with schools and parents, transferring students to depots for safety and operating standby buses to ensure that no students were left at risk or stuck anywhere.

“By quarter-past six that night, we got the last student on the network safely to their home.

“While the drivers were serving the public, all of their cars were damaged, many beyond economical repair. 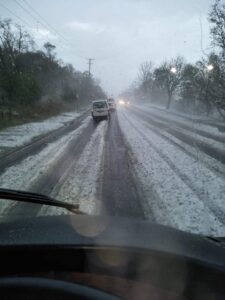 Driver Merv Fitzpatrick was travelling to work in his brand-new Mitsubishi ASX when the storm brought traffic to a standstill.

“I couldn’t outrun it, it just got heavier and heavier and my new car got hit by hail stones that were bigger than golf balls,” Mr Fitzpatrick said.

“It badly dented in the roof, the bonnet and back end, I couldn’t believe it.”

CEO Nicholas Yap said that it was great to see how CDC staff were able to continue services in such difficult circumstances and show the true spirit of serving the community.

“We understand that our drivers are doing incredible things, linking people, places and communities on a daily basis,” Mr Yap said.

“However, the storm on October 20 brought out some genuine selflessness and initiative from the drivers on shift. It was seen by all of the customers they served that day.

“Recognising that they need to make repairs to their cars and excess payments on their insurance, we will be providing every one of the 22 staff members with damaged cars with $500 from our We Care fund, to help them with their losses and to thank them for proudly displaying the CDC We Care values.

“To further show our appreciation and to celebrate the way that everybody came together to serve the community, we have funded barbecues at our Coffs Harbour and Sawtell depots.

“To the staff of Sawtell and Coffs Harbour, thank you so much for representing CDC the way you did on October 20 and showing the community what We Care is all about.”